Give Up Your Job

God essentially asked Moses to turn his job over to Him. In order for us to have God’s best for us, we have to give it to him. We have to give up control of our professional destiny and turn it over to God.

Look what happened to Moses’ rod when he gave it up: it transformed into a snake. You see Egyptian Pharaohs wore a headdress with the likeness of a Cobra. When God changed the rod into a snake , he was telling Moses that he was going to use Moses’ new position to influence Pharaoh. I believe that the Moses’ rod became a cobra. I think so because when Moses came into the presence of Pharaoh and saw the snake headdress, God was using these occasions to remind Moses of his experience on Mount Horeb. You can bet that over the next few weeks, Moses was on Pharaoh’s mind even more so than that “snake-hat” of his.

The Power to Influence Authority

We have this same ability available to us: we can influence established authority to get God’s will accomplished in our workplace and beyond. We see this all through the bible. In the old testament, Daniel and Joseph had a lot of clout with the rulers of their day. Also Naaman’s healing from leprosy was the result of his heeding the advice of his wife’s servant girl. No matter where you are or what job you have, your influence can further God’s plans here on earth. This is why it’s necessary for you to surrender your job to him in the first place: so that he can have the freedom to work through you in a way that will far exceed your own abilities.

This also brings up a very important point: you must submit to the chain of command. Be sure to respect the authority that your boss has over you. You should respect authority because God respects authority. Think about it. God did not just send Moses in and just take the Israelites to the Promised Land. Pharaoh had to release them voluntarily. God had respect for Pharaoh’s authority — and Pharaoh was the anti-Christ! Well, maybe not the anti-Christ but a role mode for the anti-Christ. What the bible scholars call a “type” of the anti-Christ. So if God respects legitimate authority even when a really bad person holds that authority, shouldn’t we be more respectful of our bosses, pastors, and other authority figures even when they rub us the wrong way! 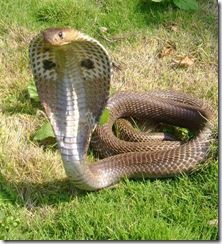 Serpents also represented wisdom and cunning. In Matthew 10:16 Jesus tells us to be “ … wise as serpents and harmless as doves.” By transforming the rod into a serpent, God was telling Moses that he would have divine wisdom on hand as he fulfilled God’s purpose for his life in his position. Godly wisdom will set you apart from your colleagues. When the prophet Daniel led a godly life, the Lord blessed him with “knowledge and skill in all learning and wisdom.” (Daniel 1:17) As a result, Daniel stood head and shoulders above everyone else in the workplace and, as a result, he had the ear of kings. You see, God doesn’t just want to promote you. He wants you to succeed. This gives you credibility when it comes time for you to step out in faith.

The Wisdom of the World is not Your Father’s Wisdom

God said to Moses, “Reach out and grab it by the tail.” He reached out and grabbed it—and he was holding his staff again. (Exodus 4:4; Msg.)

Note what God tells him: take the snake by the tail. It is generally not smart to take a highly venomous snake by the tail. That’s an invitation for a snakebite! This demonstrates that Godly wisdom sometimes runs counter of what the world expects. In other words, the wisdom of the world is not your Father’s wisdom. From the worldview, it is not considered smart, for example, to lead your group so that a river blocks the escape route against the world’s finest army. God deliberately used this very situation to deliver his people in a stunning victory. As you continue to put your trust in Him, he will lead you to victory.

Note that the snake reverted to its original rod form. This illustrates the pervasive influence of Godly wisdom into Moses’ position. When God promotes you, He fully integrates your position with the wisdom needed to successfully carry out your commission. He makes available unlimited access to His wisdom (James 1:5) when you need it.

link to How Much is The Tithe?

10″Bring the whole tithe into the storehouse, so that there may be food in My house, and test Me now in this,” says the LORD of hosts, “if I will not open for you the windows of heaven and pour...

Continue Reading
link to Giving: Unless It Feels Good Don’t Do It!

2 Corinthians 9:7-8 (New International Version) 7Each man should give what he has decided in his heart to give, not reluctantly or under compulsion, for God loves a cheerful giver. 8And God is...